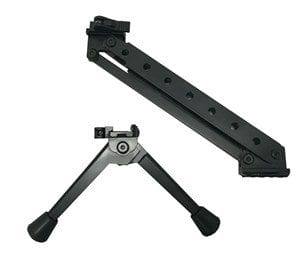 The Hyper – Pod is an intuitive design which was developed to enhance the capabilities of the well-known Bi-Pod. The Hyper Pod, simply hyper extends the bi pod from the rifle giving it an easy automatic raising and lowering capability, and solves any limitations the bi pod is presented with when in tough and rugged terrain. While in a hunting situation, particularly in mountainous regions, a bi pod can be rendered useless while attempting to take a difficult shot in a difficult position. In some situations a shooter is forced to take a long distance shot free handed, which is in most cases near impossible to make a clean kill during the attempt.