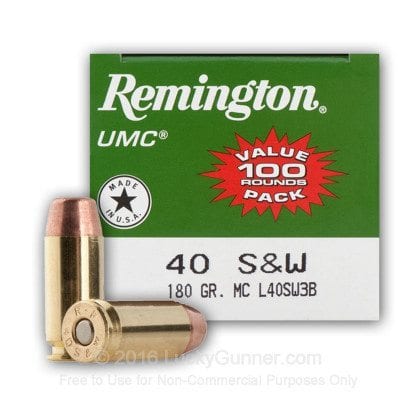 The 40 S&W is one of the most popular pistol cartridges in use today.  It has an interesting origin, being derived from the 10mm Auto which was the FBI’s answer to the research for the best autoloader cartridge subsequent to the Miami shootout of 1986 wherein two agents were killed and five more wounded in the gun battle with two alleged bank robbers who were also killed in the fire fight.

The 10mm auto was the brainchild of several minds notably Jeff Cooper and introduced in the Bren Ten pistol featured in the original season of Miami Vice as Sonny Crockett’s gun.  The FBI adopted the cartridge but preferred it chambered in S&W 1076 pistols or Colt Government Model Delta Elite autoloaders.  The FBI load was a 200 grain bullet at 1,300 FPS rendering 750 ft pounds of muzzle energy.

After adoption, the 10mm proved too difficult for many agents to shoot given its sharp recoil, muzzle blast, and the large size of the pistols required to fire it so the FBI subsequently adopted a reduced loading that cut the recoil and muzzle blast but stayed with the large frame pistols.

Smith & Wesson who produced the pistols looked at the data and realized the reduced load would work in a shortened cartridge that would fit the smaller pistols that were designed for 9mm Luger and thus the 40 S&W was born, a joint development by S&W and Winchester who produced the ammo.  These smaller guns would also make it easier for smaller shooters to handle, and the guns more concealable.

The 40 S&W shoots a 180 grain bullet at about 1,000 feet per second and 475 foot pounds of muzzle energy giving it better stopping power than the 38 and 9mm pistols it replaced and yet fitting in a similar pistol and having manageable recoil.  The Glock, SIG, Beretta, and S&W 40 S&W caliber pistols are popular with shooters who use it for personal protection, police work, and target shooting.

Remington UMC ammunition is Target quality and is cheaper than that using expanding bullets designed for carry.  The cartridges are loaded in a 50 round box and have 180 grain Flat Nose FMJ bullet which Remington UMC designates as Metal Case. Metal Case is synonymous with Full Metal Jacket used by other manufacturers.  Either designation means the bullet is completely covered from nose to base with a copper jacket for less deformity during handling and shooting.  The ammo shoots well in my Glock 23 grouping at point of aim at 50 feet, standard pistol shooting distance at most ranges.

PICTURE IS FOR ILLUSTRATION ONLY